2  THIS GIRL IS MINE

6  OTHER HALF OF
MY HEART 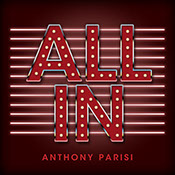 Born and raised in New Rochelle, NY, Anthony was surrounded by both music and art from a very early age. From the time he could walk, he witnessed both his parents creating art and playing music every day so that it became common place for him and a natural means of expression.  By the time Parisi was in his teens, he was already writing songs for his first band. Now, living in Southern New Jersey, he divides his time between creating music, photography and Classic Rock illustrations.

On his current releases, ALL IN and NIGHT IN ROSWELL, Anthony shows  a sampling of musical styles running the gamut from Power Pop to hard rock, Parisi cites influences such as The Who, The Kinks, Rolling Stones, The Raspberries, the Knack and The Beatles. Grinning, he admits, "from the very beginning, It’s always been the Beatles!"

Anthony, a self proclaimed guitar junkie, plays all of the guitars, sings all lead and background vocals, drums, keyboards and bass.

When performing live, Anthony is backed up by his mighty band, ANTHONY & THE SIDECARS, comprised of Chris Bader on Bass, Mick Green on drums & Dan Goeggel on lead guitar.

6  I SHOULD HAVE KNOWN

10 I MUST BE DREAMING